The Debate: Marijuana for PTSD

The debate over the legal use of marijuana for medicinal purposes is well-known and evolving in the United States, with many states legalizing its use in recent years. These developments have raised the question of how cannabis can impact many diseases, syndromes, and injuries, including Posttraumatic Stress Disorder (PTSD). PTSD is a mental 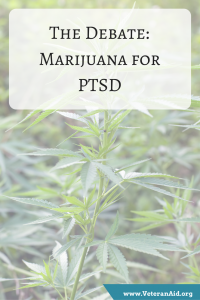 health problem that can occur after a traumatic event like war, assault, or disaster, and many veterans struggle with this debilitating disorder on a daily basis.

So can cannabis really make a difference in the lives of PTSD sufferers? Unfortunately, the answer is not completely clear, with a lack of official human research playing a big role in the ambiguity. There is a wide range of debate, with both sides citing scientific research, medical exploration, and anecdotal results to support their views.

Proponents of the use of cannabis for PTSD cite animal research and trials in other countries, specifically the work of Raphael Mchoulam, Ph. D., an Israeli organic chemist who is credited with discovering the body’s endogenous cannabinoid system, named after the plant that led to its discovery. This system stretches throughout the human body and is made up of endocannabinoids and their receptors. Its main goal is to maintain a stable internal environment regardless of fluctuations in the external environment (also known as “homeostasis”).

Certain plant substances, like Delta-9-tetrahydrocannabinol, or THC, are believed to stimulate cannaboid receptors, helping regulate the body’s internal balance and affect the person’s relationship with external stimulus, potentially helping reduce anxiety and feelings of fear, or improve sleep. While many of the most well-known versions of cannabis have strong psychoactive responses, other forms of the marijuana plant are being explored to deliver the benefits without the side-effects (for example, the “high” that could impact other parts of a person’s daily functioning).

Dr. Mchoulam’s recent animal studies (human trials, especially in the U.S., have not been approved) have also shown a reduction in reactions to painful memories, a phenomenon he’s called “memory extinction.” He explained that an animal that has been administered an electric shock in conjunction with a specific noise will eventually forget about the shock once it hears the noise alone, without the shock, for several days. Mice without cannabinoid systems, however, simply never forget; they continue to cringe at the noise indefinitely.

This memory extinction could possibly be helpful in disconnecting a veteran’s PTSD response to specific stimuli – loud noises, visual cues, certain settings – by lessening the intensity of the traumatic memory. Dr. Mechoulam hopes to begin studies soon with Israeli veterans to explore this further.

Even proponents of the use of cannabis or THC for PTSD recognize that use appears to primarily treat symptoms rather than offer true healing. However, they argue that this in itself is beneficial, just as one might take aspirin for a headache or a diuretic for high blood pressure. They also argue that further investigation is needed on how these, and other non-psychoactive versions of the marijuana plant, could go even further to help those suffering with PTSD by activating the body’s cannabinoid receptors.

The National Center for PTSD offers the official stance that the use of marijuana for relief of PTSD symptoms is concerning, due to many factors including the lack of controlled human experiments to verify safety and effectiveness. Use of marijuana has increased substantially in recent years, and along with it, the rate of cannabis use disorder, a problematic pattern of use leading to clinically significant impairment or distress.

This disorder typically includes a strong desire to take the drug, difficulties in controlling its use, persisting using it despite harmful consequences, a higher priority given to drug use than to other activities and obligations, increased tolerance, and sometimes a physical withdrawal state.

Other medical and psychiatric problems potentially associated with marijuana use include chronic bronchitis, impairment in short-term memory, motor coordination and the ability to perform complex psychomotor tasks such as driving, and psychiatric problems such as psychosis and impairment in cognitive ability. Some research has shown that chronic marijuana use can impact a person’s quality of life, fostering feelings of poor life satisfaction, decreased educational attainment, and increased sexual risk-taking behavior.

While both sides of the argument agree that people with PTSD do have a greater availability of cannabinoid receptors in their bodies, data suggests that the continued use of marijuana among individuals with PTSD may lead to marijuana intolerance and addiction. Studies have also shown that people with PTSD have particular difficulty stopping their use of marijuana and responding to treatment for marijuana addiction, and experience greater craving and withdrawal than those without PTSD. They may also have a greater risk of relapse during six months after quitting. However, medical providers have seen a benefit in employing many evidence-based treatments for marijuana addiction, like cognitive behavioral therapy, motivational enhancement, and contingency management, to help PTSD sufferers fighting addiction.

Another concern against the use of marijuana for PTSD symptoms involves that variability of dosage and potency. The various forms in which cannaboids can be produced and consumed entail a wide range of effects, from the timing of release to concentration, to the level of psychoactive reactions. For example, the concentration of THC in a marijuana plant can range in strength from less than 1% to 30%, based upon strain and cultivation methods. Recently, however, cannabis extract products like waxes and oils have been produced and sold with THC concentration as high as 90%. An individual can unknowingly consume a very high dose of THC in one setting, with an increased risk of an adverse reaction or a stronger reaction than intended.

For now, the global debate continues as researchers weigh the risks and benefits of marijuana use for PTSD. Ideally final judgments will be made in the near future, but for now, veterans and other PTSD sufferers must wait and see what the scientific community can uncover. 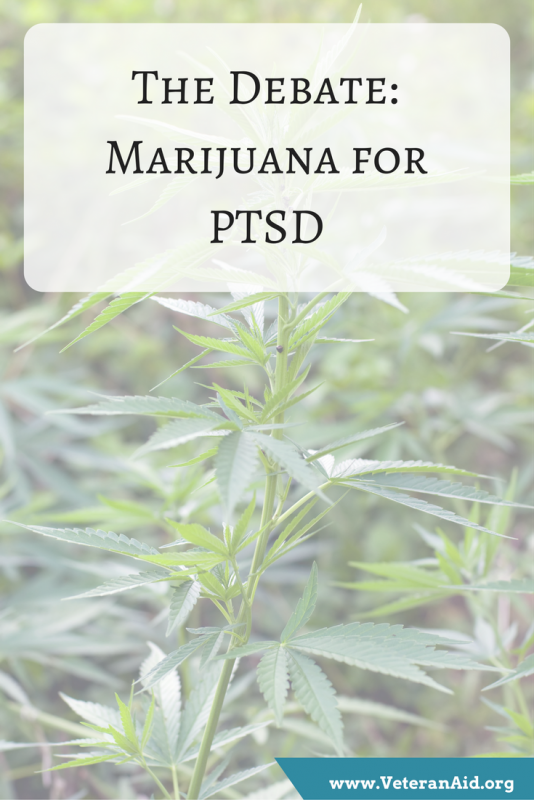