No More File and Suspend: Social Security Changes in 2016

Posted in Uncategorized on May 12, 2016
Tags: tips for seniors

If you’ve been crunching the numbers and looking ahead to your retirement, you’re most likely aware of the major changes to Social Security filing policies that have recently taken effect in 2016.

Near the end of 2015, President Obama signed an emergency bill created by Congress to avoid a U.S. debt default, 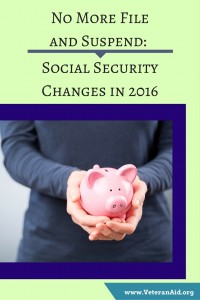 bail out Medicare from substantial premium increases in 2016, and extend the life of Social Security’s disability insurance program. Among the most noticeable changes to social security procedures was the removal of two common filing strategies that primarily benefited married couples – the “file and suspend” loophole and the “restriction of application” strategy.

Depending on whom you ask, these strategies were considered either aggressive or very smart. Basically, the strategies involved one member of the couple (usually the higher earner) activating his or her social security benefits at full retirement age, then immediately suspending them.

This allowed the spouse to claim spousal benefits (typically 50% of the spouses earned benefits), while still allowing the higher earner’s suspended benefits to earn delayed retirement credits of 8% for up to four years. The couple could live of the spousal benefits and then ensure a higher monthly payout once the higher earner reached age 70, as well as establish higher survivor benefits.

Similarly, a member of a married couple who has reached full retirement age could, instead of activating his or her full social security benefits, file a restricted application for spousal benefits only. This would allow his or her own earned benefits to earn the deferred rate increases for up to four years, while still allowing spousal benefits to supplement his or her savings.

Now, with the passage of the Bipartisan Budget Bill of 2015 into law, File & Suspend and Restricted Application have been effectively eliminated for anyone born in 1954 or later. A person can still choose to suspend his or her payouts to earn the deferred credits, but now spouses and dependents will no longer be able to claim spousal benefits during this time until the original earner re-files (or un-suspends) his or her benefits.

Similarly, once a spouse activates his or her benefits, they will automatically receive whichever payment is higher – his or her own earned payments or the spousal credit. This is called “deemed filling” and whenever you apply for any benefit, you are deemed to be activating any and all benefits for which you are eligible. Social security will only pay the single highest of those for which you are eligible.

There are a few small remaining ways to add additional earnings to your monthly benefits involving a “spousal excess benefit” but it’s wise to meet with a financial planner who understands and can advise you. Often times there are several calculations and variables to consider when planning on when and how to file to make the most of your social security benefits.