Posted in Uncategorized on May 9, 2016
Tags: holiday, veterans

The first person to set foot on the moon. The creator of flame-retardant clothing. The inventor of an early tsunami 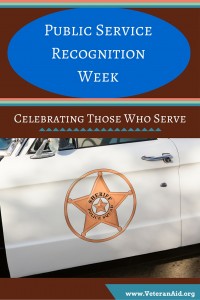 detection system. Caregivers for veterans and wounded soldiers. Your mailman.

What do they all have in common? They are all public servants. More than 3 million Americans are classified as “public servants,” non-uniformed employees of the federal government that work in all three branches, from the county level all the way up to federal roles.

For the last 30 years, the first week in May has been proclaimed Public Service Recognition Week, with governmental bodies in various cities and states taking time to thank their local public servants. The branches of the armed forces as well make grateful gestures to the civilians who help support the servicemen and women, and President Obama joins in with a letter of thanks.

“Our Nation's progress has long been fueled by the efforts of selfless citizens who come together in service to their fellow Americans to change our country for the better,” President Obama stated in his 2016 Presidential Proclamation. “This week, let us embrace the hopeful spirit that embodies the extraordinary work of our civil servants.  It is the same spirit that built America, and because of the hard work of compassionate and determined public servants, it will continue to build us up for generations to come.”

The honorary week was first celebrated in 1988 and was established by the Public Employees Roundtable (PER), a non-partisan coalition of government organizations representing civil servants and retirees. When it instituted the recognition week, its goal was to recognize quality work and to educate Americans on the role and value of public servants.

While the 2016 week is technically over, there are still many ways you can honor the public servants in your community and all the hard work (though typically under-appreciated) they do on a daily basis. For example:

We at VeteranAid.org would like to thank all public servants who keep our nation and government working, inventing, and excelling.