Happy Birthday to the American Legion

Veterans transitioning back into civilian society have always had to be creative, resilient, and supportive of each 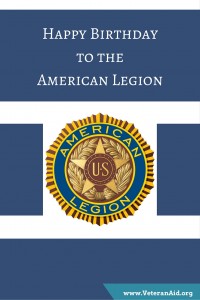 other, even almost 100 years ago at the end of WWI. In fact, it was a group of veterans tasked with brainstorming ways to improve troop morale that came up with what is today known as the American Legion.

This week we celebrate this organization – founded on March 15, 1919 – and whose original mission was to “preserve the memories and incidence of our association in the great war,” and help those who had served in foreign wars reintegrate into their hometowns while still remaining connected with their fellow servicemen with whom they had served abroad.

It may not be surprising that the group of veterans asked to submit ideas for boosting morale was a group of 20 officers who served in the American Expeditionary Forces in World War I, bringing specific experience of returning from service abroad. What is interesting, however, is that the officer credited with suggesting the idea for the American Legion was actually Lt. Colonel Theodore Roosevelt Jr., the eldest son of President Theodore Roosevelt and First Lady Edith Roosevelt (he would later return to active service in the Army during WWII, leading the first wave of troops at Utah Beach during the Normandy landings and earning the Medal of Honor).

The American Expeditionary Force met in Paris for the first American Legion caucus, laying the groundwork for the organizations that would transform a group of war-weary veterans into one of America’s largest and most influential non-profit organizations. Membership swiftly grew to over 1 million, with local posts springing up across the country. The Legion acted primarily as a support group, a social club, and extended family for former servicemen. Soon, however, leaders met to draft a constitution and set up official headquarters in New York City, adding the focus of helping veterans find employment and support they desperately needed.

Later in 1919, a organization for female veterans was formed as an official affiliate for the Legion, named the American Legion Auxiliary. In less than one year, 1,342 local units of the Women’s Auxiliary to The American Legion had been organized in more than 45 states. Today, the Auxiliary includes a membership of more than 800,000 women.

For close to a century, the American Legion has worked to create social change in America, achieve hundreds of benefits for veterans, and establish many important programs for children and youth. For example, the Legion become the chartering agency for more than 1,700 Boy Scout units, representing more than 64,000 youths. It also established the American Legion Baseball program; today, more than 50 percent of Major League Baseball players are graduates of this program.

Today, eligibility for American Legion membership is limited to those honorably discharged veterans and current personnel of the United States Army, Navy, Marine Corps, Coast Guard or Air Force who served at least one day of active duty during specific foreign engagements. Membership for the Legion peaked immediately after World War II, soaring to 3.3 million. After the Korean War, there were 2.5 million Legionnaires, and, as baby boomers joined, membership increased to 3.1 million in 1992. Today’s membership is around 2.3 million members.

Join us in wishing a very happy birthday to the American Legion, an organization’s whose founding focused on supporting those who has served our great nation. Today, almost 100 years later, it continues to make a real impact not only in the lives of veterans, but in our whole society as well.