You’ve seen them on the big screen, but it may surprise you to know these Hollywood stars actually spent years of

their life serving in the the U.S. armed forces. Check out these seven actors you may not know are military veterans.

Ice-T: Originally one of the pioneering “gangsta hip hop emcees,” Ice-T (born Tracy Marrow) joined the Army after leaving Crenshaw High School in 1979. While stationed in Hawaii, he reportedly bought his first audio equipment to begin pursuing his work in music. After 4 years of service, he returned to civilian life and soon released his debut album Rhyme Pays, the first hip-hop album to carry an explicit content sticker. Much later in life, he would transition into an acting career in movies and tv, gaining notoriety as NYPD police officer in the television series, Law & Order: Special Victims Unit.

Gene Wilder: It may be hard to imagine “Willie Wonka” serving in the military, but Wilder did in fact serve a short time in the U.S. Army after being drafted in 1956. After completing recruit training, Wilder was assigned to the medical corps and sent to Fort Sam Houston for training; he would later serve as a paramedic in the Department of Psychiatry and Neurology at Valley Forge Army Hospital. After being discharged in 1957, Wilder went on to a highly successful acting career, nominated for two Academy Awards (one for his role in The Producers and one for his work on the screenplay for Young Frankenstein).

Bea Arthur: Arthur was already 5’9” by the time she was 12 years old, and had a big personality to match her stature, being named “wittiest girl” in her school. Before entering what would be a very successful acting career, Arthur served 30 months in the Marine Corps during WWII as a typist and truck driver. After returning to civilian life, she would receive two Emmys, one for her role as Maude Findlay on All in the Family, and one for her role as Dorothy Zbornak on The Golden Girls. She also won a Tony for her performance as Vera Charles in the original cast of the musical Mame.

Chuck Norris: Star of action films and a strew of Internet memes about toughness, Chuck Norris joined the Air Force after graduating from high school and served in Korea. When he returned, he began to seriously pursue martial arts, becoming an instructor to many famous students, including Steve McQueen (also a veteran), McQueen would encourage him to explore acting, and Norris took his advice. He would go on to find success in many movie and television roles, including The Way of the Dragon in which he starred with Bruce Lee, and the tv series, Walker, Texas Ranger.

Rob Riggle: You may recognize Riggle from his comedic performances on the The Daily Show, The Hangover, The Other Guys. and other similar comedies. Often portraying a loud, brash bully, this actor actually holds an esteemed background in military service as a Lieutenant Colonel in the Marine Corps. He served in Liberia, Kosovo, and Afghanistan, earning more than 19 medals and ribbons for heroism in combat, including the Combat Action Ribbon. In 2007, Riggle traveled to Iraq to report for The Daily Show as well as to entertain the troops as part of the USO. He retired from the Marine Corps in 2013 after 23 years of service.

Mr. T: Whether you remember him from “The A-Team,” professional wrestling, or even a voiceover in “Cloudy with a Chance of Meatballs,” the distinctive voice, gold chains, and muscle-bound physique are synonymous with his name. Born Laurence Tureaud on the south side of Chicago, he built up his body to survive in a rough neighborhood. In 1975, he enlisted in the U.S. Army, where he received a letter of recommendation by his drill sergeant and was named “Top Trainee of the Cycle" from more than 6,000 troops. His physical strength served him well during service; he once had to complete a punishment given by a platoon sergeant by chopping down trees. The sergeant neglected to tell Tureaud how many trees to chop, however, and was shocked to return and find Tureaud had chopped more than 70 trees in around 3.5 hours.

Drew Carey: Funnyman and host of the new The Price is Right, Carey reportedly started his stand-up career during his time in the Marine Corps Reserves. Carey served six years then moved to Las Vegas, where, on the advice of a DJ friend, went to the pubic library to check out books on how to write jokes. He would go on to win an open mic contest and appear on Star Search and The Johnny Carson Show. After a successful career as a stand-up comedian, Carey gained widespread popularity with his sitcom, The Drew Carey Show, and later serving as host of the Whose Line Is It Anyway? 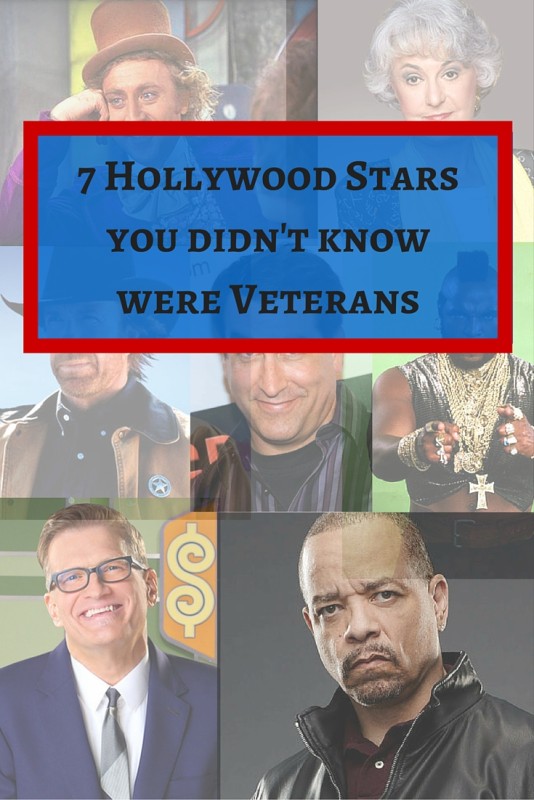