As we celebrate the life of the great Martin Luther King Jr., let us remember wise words he said about the military 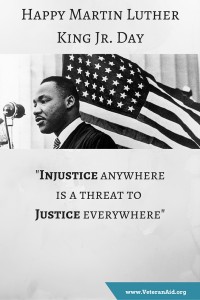 Yes, while most people association Martin Luther King Jr. as a pacifist, he had some intriguing quotes about military service that should not be ignored.

In 1967, King Jr. made a speech pertaining to the Vietnam War. In this speech, in which he was observed of having a lot of knowledge about the conflict, he directed a message to ministers.

"As we counsel young men concerning military service we must clarify for them our nation's role in Vietnam and challenge them with the alternative of conscientious objection."

He did not say we should stop our young men from joining the military, but rather make sure the ministers who council these young men present them with the alternative of conscientious objection.

Martin Luther King, Jr. knew and wrote about past wars where black men joined, fought admirably, but then came home to still face Jim Crow laws in the south. To still be subjected to discrimination, from World War I, II, and Korea.

And now Vietnam. That was his main point. To tell young black men that during this politically unpopular war was now a good time to take a stand. That if black men are going to serve, then why are they not treated the same, during the war and coming home, as a white man? Remember, World War II the services were still segregated until the end.

Martin Luther King, jr. made the point over and over that military service was one of the only ways a young black man could succeed. But he also knew that now was a good time to take a stand. Both against the war and the segregation and discrimination that black GI's still faced at home."*

In the end we salute Rev. Martin Luther King Jr., as a man who lived and died for the oppression and justice of others. He just chose to do it in a non-violent way.