A lot of us dream of travel after retirement but most of us don’t follow through. A 2011 poll of retirees found that 2/3 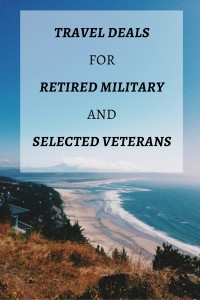 traveled less or the same amount as they did before retirement, in part due to the cost involved. There are plenty of resources for frugal travelers, but there are a few that are only open to retired military and Department of Defense personnel, disabled veterans, and relatives of active-duty service members.

Each branch of the military runs lodging that’s open to service members, relatives, retirees, and qualified veterans (in general, those with a 100% service-connected disability, those separated under certain programs, and Medal of Honor recipients). These inns and hotels are primarily for families of active-duty personnel while moving from one assignment to another, but there’s often room for other travelers on what’s called a space-available basis.

For example, the Air Force operates 89 inns on bases across the US and in Spain, the Azores, Germany, Japan and the UK. Army Lodging is open as space permits on 39 posts. The Marine Corps and the Navy operate several types of lodging including camping cottages, RV parks, and inns. Most of these lodgings aren’t lavish but they are comfortable and highly secure.

They’re also affordable. Air Force Inn rates currently range from $60-$75, and access to base amenities like playgrounds, pools, golf courses, and shopping is included. The USMC Inn of the Corps in Kaneohe Bay, Hawaii, offers rates between $99 and $149 per night as of December 2015.

When you make your space-available reservations, it’s a good idea to make a second reservation at a nearby commercial motel—something you can cancel close to your arrival date without a penalty--in case your military lodging becomes unavailable. You can find detailed information on all your options and eligibility requirements on the DOD Lodging website.

The Armed Forces Recreation Center resort hotels in Waikiki Beach, Walt Disney World, central Seoul, and the Bavarian Alps offer a more upscale experience for retirees and eligible veterans. Each destination offers below-market rates and special deals. Hale Koa in Hawaii, for example, offers beach side rooms at about half the cost of the nearest civilian resorts, and Dragon Hill Lodge in Seoul offers low-cost group travel packages for retired military and spouses.

Hale Koa, Shades of Green at Walt Disney World and Dragon Hill Lodge all have the same eligibility rules. You can review them online (Hale Koa, Shades of Green, Dragon Hill Lodge) or contact the resort. In general, as with space-available lodging, rooms are open to retired active duty, reserve, and National Guard members as well as to honorably discharged vets with a 100% service-connected disability, involuntarily separated participants in the Transition Assistance Management Program, and some veterans discharged under the Voluntary Separation Initiative and Special Separation Benefit programs. Surviving spouses and former spouses may be eligible as well.

The rules for staying at Edelweiss Lodge and Resort in Germany are different, as the ski resort falls under recently updated Army in Europe regulations. The bottom line for retirees and vets is they must “spend at least 30 days in Germany and have verification of eligibility from the German customs office” to make a reservation. That rules out a week long jaunt from the US to the Alps, but for retirees and eligible veterans who live in Germany or plan to visit for more than a month, a few days at Edelweiss might be the peak (pun intended) of the trip.

One Response to “Travel Deals for Retired Military and Selected Veterans”