The Makeup of the Military: Who is Serving Now

It’s been more than 40 years since the end of the Vietnam War and the subsequent shift of the United States Armed Forces to an all-volunteer organization from a draft model. With the ending of the draft, it was obvious that a change in military demographics would naturally follow, and in 1974, Congress that the Department of Defense (DOD) produce an report – The Population Representation in the Military Services (Pop Rep) – to document the historic and current characteristics of U.S. military personnel. The most recent published version, published by the Office of the Under Secretary of Defense, Personnel and Readiness (the Pentagon’s HR department), was released in 2015 and gives insight into some interesting trends and demographics evolving in the U.S. military. This data helps the U.S. government ensure that the country is always prepared and able to recruit as needed in times of necessity.

Perhaps not surprising is the drastic decrease in size of the U.S. military over the last 40+ years. At the end of 1974, the active 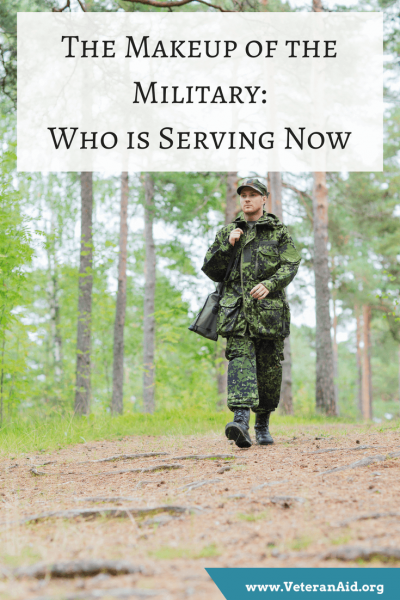 component (AC) of the military stood at more than 2.2 men and women. At the end of 2015, the total AC number hovered around 1.3 million, a 41% reduction. The greatest decrease took place in the Air Force, followed by the Marine Corps, and the Navy. The Army’s strength over the past 40 years remained relatively flat.

The end of the Cold War in the early 1990s led to a significant drop in force size and, 1997 to 2015, the enlisted force fluctuated between 1.1 million and 1.2 million servicemembers. The wars in Iraq and Afghanistan increased the size of the Army and the Marine Corps, but this increase was at least partly offset by decreases in the size of the Air Force and the Navy. And while the Army’s strength drop rather dramatically between 2013-2015, it remains significantly larger than the other branches (47 percent larger than the Navy and 54 percent larger than the Air Force).

Similarly, over the last 40 years, the geographical home region of active duty servicemembers has shifted southward and westward. The percentage of active duty members from northeastern states fell from 18.1 to 12.6 percent, and north-central states, from 27.2 to 18.7. Over the same time period, the number of active duty members calling the south home has increased from 35.3 percent to 43.8, and those from the west have grown from 18.7 percent to 23.7 percent.

Another interesting shift in demographics has been an increase in a traditionally under-represented population: female servicemembers. The ratio of women to men in both the officer corps and the enlisted ranks has grown steadily over the past four decade, with the biggest increase being seen in the Navy where the ratio of newly enlisted females grew from 3 percent to 25.1 percent. In the Air Force, female officer commissions increased from 7.5 percent to 26.7 percent, giving the Air Force the highest ratio of female officers.

The Pop Report also points out that while overall size and strength numbers have decreased over the years, the recruitment environment has remained favorable most recently due to weakness in the civilian labor market in the years since 2009. Traditionally, when young people have more difficulty finding employment in the civilian world, they are more interested in learning about opportunities in the Armed Forces. With more people applying at recruitment offices, the branches can be more selective in hiring, seeking out the “high-quality enlistees,” as defined as those who have completed high school and score well on a qualification test.

However, as the economy improves and more young people go directly to college after high school, the military recognizes it is important not to weaken the recruitment forces; since there is no lateral entry into the military, it is imperative to have experienced, knowledgeable recruiters in place to face fluctuations and ensure that high quality recruits are retained (i.e., future officers) and that the branches remain suitably staffed.

For more findings from the Pop Report, you can review the 66-page Executive Summary.