States with the Most and Fewest Members of the Military

The United States military is – based on statics like military spending, manpower, and number of aircraft carriers and nuclear warheads – arguably the number one fighting force in the world. Along with these statistical comparisons, the US. military maintains an impressive 800 bases in 150  countries around the globe, many of which establish “little Americas” on foreign soil. 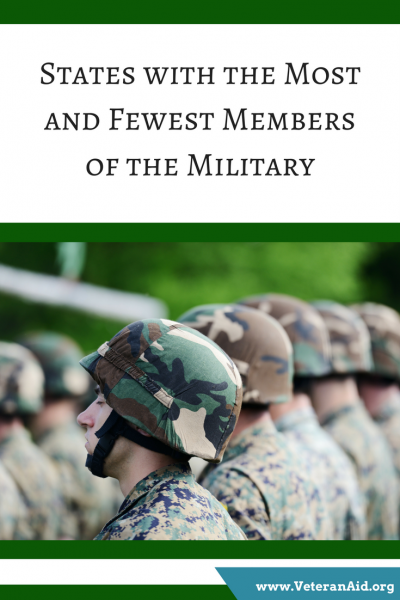 state, and in March 2017, the top states based on military personnel (ranked by total active duty plus reservists) included:

In the same data, the states with the fewest number of active duty and reservists included:

Perhaps not surprisingly, many of the states with the largest number of servicemembers also had the highest populations per state. California, Texas, North Carolina, Florida, Georgia, and New York lead the states in total population, so it makes sense that they would also have more servicemembers than states with smaller overall populations. Other indicators that might influence the overall number of servicemembers is the number of military bases in the state; for example, West Virginia has two bases while Texas has 31. Finally, some experts believe that a familiarity with the military – resulting from having a large military and veteran population – increases the chances that residents will enlist and/or become reservists, making the cycle self-sustaining.

Interestingly, when comparing the lists of top servicemember-populated states to our recent article on the best and worst states for retired veterans, the correlation between high military presence and a good quality of life for veterans does not necessarily stand up. While a few of the states with the most active duty and reservists did rank well for veterans – such as Florida and South Carolina – other lower-populated states like Alaska and South Dakota actually ranked higher for veteran health care, quality of life factors, and economic environment.

For additional research, see our article on the best and worst states for senior veteran health care.