Posted in Uncategorized on January 2, 2018

Honorably discharged veterans now have one less thing to worry about when needing to show proof of their service for benefits and discounts: identity theft. Thanks to the newly available Department of Veterans Affairs (VA) veteran ID card, all honorably discharged veterans can easily identify themselves as veterans without carrying around documents containing sensitive information. 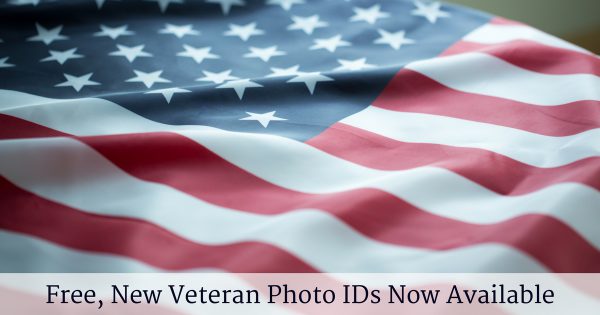 Previously, veterans without other government-issued military ID had to show their DD-214 form to receive discounts or otherwise prove their prior service. Unfortunately, the DD-214 form includes information that could be useful to an identity thief, such as the veteran’s birthday and social security number. While some veterans would attempt to mark out this information, carrying it around on a daily basis, or having to remember to bring it for certain occasions, was burdensome.

The new Veteran ID Cards (VICs), originally mandated as part of the Veterans Identification Card Act of 2015, can, as of November 29, 2017, be applied for online. The new veteran photo IDs will include the veteran's name, photo and a non-Social Security identification number.

The new cards are aimed specifically at simplifying life for veterans who served honorably but were separated before retirement, or who did not meet the medical discharge threshold. Veterans who receive health care from the VA or have a disability rating can already get a photo ID VA health card – known as a Veteran Health Identification Card – while military retirees are typically issued an ID by the Defense Department. Other options for veterans previously included requesting a proof of service letter through the VA's ebenefits website, or requesting a veteran designation on a driver’s license if offered by the veteran’s states offices.

While the original law mandating the new VICs allowed stipulations for the VA to charge for the cards, there is currently no charge for a new ID. To request a card, veterans can visit the VA’s veteran benefits website, vets.gov, and visit the "Apply for Printed Veteran ID Card" page; you will be prompted to sign in or to create an account.

According to the VA, veterans should receive their card within 60 days and can check delivery status of their cards at vets.gov. A digital version of the VIC will be available online by 2018.