Posted in Uncategorized on May 3, 2017
Tags: military, tips for seniors, veterans, veterans benefits

For most World War II veterans, the idea of visiting the National WWII Memorial in Washington, D.C., is a lovely but seemingly unattainable dream. The memorial, which opened in 2004, honors the 16 million members of the U.S. Armed Forces who served in the conflict, including the more than 400,000 who died.

For a senior veteran, the trip could mean a chance to reminisce on their years of service, remember their fallen brothers and sisters, receive some well-deserved honor from civilians, and find a sense of closure. However, many WWII veterans lack the physical and mental fortitude to plan and carry out a multiple-day trip on their own, not to mention the financial capabilities or the friends or family able to take time to accompany them. The Honor Flight Network aims to change that, making the dream of “one 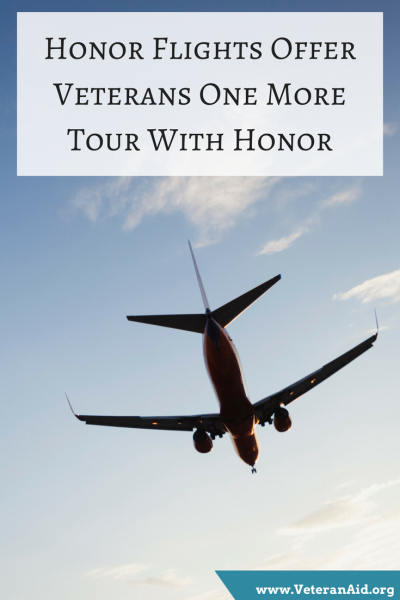 more tour with honor” a reality.

The idea of the first Honor Flight originated with Earl Morse, a VA physician assistant and retired Air Force captain. When the WWII memorial opened, he talked to many of his WWII veteran patients, and most were excited and agreed that they would like to visit it some day. Months later, however, at subsequent visits with more conversation, Morse realized that none of the more than 300 veterans had visited the memorial, and that, for most, that trip was never going to happen.

Motivated to find a way to change this, Morse – who also happened to be a private pilot and member of a leading aero club – came up with the idea of organizing volunteer pilots to fly the veterans to D.C. for free, then act as tour guides during the trip. After lining up the volunteer pilots, he proposed this idea to a few of his veteran patients; they were so moved that they broke down in tears and graciously accepted. The first Honor Flight trip entailed six small planes flying 12 very happy veterans, and both volunteers and veterans experienced a life-changing trip.

Inspired by the concept, Jeff Miller, a dry cleaning company owner in Hendersonville, NC, and son and nephew of WWII veterans, managed to get the arrange the first use of a commercial airline charter, for free, to transport a plane full of WWII veterans and their “guardians” – family, friends, or volunteers who accompany them on the trip. The Honor Flight group and HonorAir team soon joined forces to form the Honor Flight Network, and, since then, have flown more than 159,000 veterans to the Washington memorials. Today, they maintain a sponsorship with Southwest Airlines as official flight provider.

Hero Flight trips typically last a weekend, and the veterans’ total expenses – lodging, food, and travel – are paid by the Network. The veterans typically enjoy a patriotic send-off from and welcome to their hub airports, and enjoy a comfortable tour of D.C.’s memorials, with the main attraction being the WWII exhibit. The organization facilitates everything a veteran might need, including meals, nametags, schedules, wheelchairs, and oxygen, to ensure that each gets a chance to enjoy the tour in a safe and healthy manner.

Organizers and volunteers of Honor Flights work tirelessly to accommodate as many WWII veterans as they possibly can, as quickly as possible. They are aware of the VA’s statistic that more than 600 WWII veterans pass away every day, and subsequently are expanding their programs to help veterans who live more remotely get to a Honor Flight hub city, or who might be able to join in the tours once in Baltimore.  Honor Flights also offer a program to help veterans of any age with terminal illness make the trip to the memorials. Additionally, the program is starting to transition their focus to on veterans who served in the Korean War and Vietnam as that population ages, although priority is still given to WWII veterans and terminally ill veterans.