5 Biggest Benefits of Hiring a Veteran

While veterans have historically experienced high rates of unemployment, it seems that civilian business owners are increasingly getting the message that hiring veterans is a smart business move. According to the U.S. Department of Labor, as of July 2017, the veteran unemployment rate was 3.5 percent, the lowest rate since 2001. This rate was actually lower than the non-veteran unemployment rate, with a greater difference than in the last five years.

So what makes a veteran a potentially excellent new employee? While you can’t over-generalize every veteran you may encounter, there are five benefits (both tangible and non-tangible) that come together to make hiring a veteran a great business decision.

While many members of the armed forces enlist at a young age, (average age for the branches range from 19-early 20s), 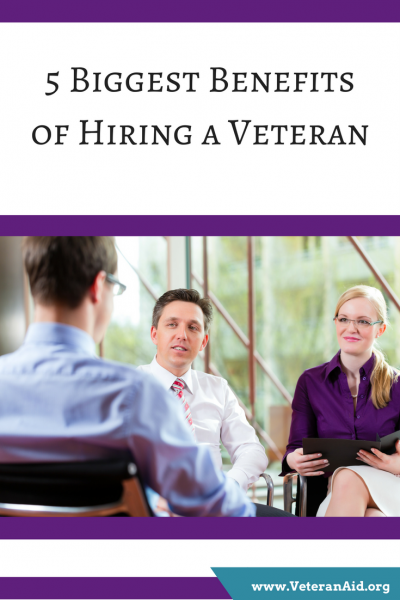 statistics show that most have been promoted and become non-commissioned officers (NCOs) within two or three years. This proves that the military not only trains young people for important roles but expects them to master and excel in these roles quickly. Members of the military must pass tests for their Military Occupational Specialty (MOS) roles, and anything less than 80% is considered failing.

Often these jobs entail operating and maintaining multi-million dollar equipment, managing and directing large teams of people, and, of course, often ensuring the physical safety of thousands of other servicemen and women. It’s important to remember that just because a potential employee has never had a “real job” in the civilian world, he or she has most likely had extensive experience in highly technical and/or important roles, especially as compared to fresh-out-of-college counterparts.

Whether you’ve only seen it in movies, know someone who has gone through it, or have been there yourself, everyone has a general idea of what goes on during Basic or Boot Camp. The main idea is that all activities and techniques – from the physical to the psychological – are conducted to ensure that the recruit will emerge with the deepest understanding and respect for the procedures, structure, and culture of his or her branch of the military. This is imperative not just for morale, team unity, and efficiency, but for ultimately ensuring safety – for one’s self and one’s squadron – in combat in days to come.

A high standard of excellence is drilled into a servicemember from day one, and anything less than perfection is unacceptable. There are no sick days (you must always report before being sent to sick bay), and there are no holidays while on deployment; you show up and work every day. You are not motivated not by all of the “soft” extras of the civilian world, but by the mission you are given to complete. These experiences tend to stay with the veteran for years after separation from the military, and veterans not only continue to respond to proper training, but to expect excellence of themselves and others.

While some people tend to unfairly categorize members of the military as uneducated, or as people who could not “make it” in college or in the civilian world, you should remember that recruits must have at least their high school diploma or equivalent, something that is not always true for other potential employees from the civilian world. Additionally, as previously mentioned, in order to be placed in certain MOS roles, a soldier must complete extensive training, often on an accelerated timeline, and be able to pass the required exams. And while the military terms on their resume might need a bit of translating into civilian- or business-equivalent verbiage, most veterans come to a potential civilian employment opportunity with a wealth of real-world experience and knowledge that shouldn’t be ignored.

Potential employers should also note that if the veteran has not yet utilized his or her G.I. Bill benefits, your own business may benefit by encouraging them to pursue their ongoing education in a related field while in your employment. Many private businesses help employees pursue their degrees – whether financially or through flexibility in work hours – knowing that this new degree will benefit their workforce in the longrun. Veterans have the added benefit of not needing to worry about the cost of a Bachelor’s or Master’s degree in a related field if they decide to pursue it while working.

A military engineer in the theater of combat cannot simply sit behind a desk in a remote office and worry only about his or her scope of work. Often they are helping dig a trench, drive a tank, serve as a medic, or carry a rifle and watch their buddies’ backs. Performing multiple roles is expected and required not only for success but for survival. It comes so naturally that a veteran may not even view it in the corporate-verbiage of “multitasking,” but that is exactly what it is.

Additionally, teams within the military are usually composed of servicemembers from a wide range of diverse backgrounds, ethnicities, and religious views. In the military, you have no choice in who is on your team, under your command, or calling the shots; you must learn to work with them, and if you are a commander, you must learn how to manage problem team members effectively, as there are very few ways to “fire” someone while in the service. Additionally, military members must learn how to communicate correctly while within the correct structure of command; for example, in combat, it is important to raise concerns or questions that could result in life-or-death situations. However, you must do so through the correct channels and with respect to hierarchy. These skills can transfer to the civilian business world, where communication is key through a team and management.

While this would not be the primary factor in your hiring process, it’s something good to be aware of for your business. You may qualify for the Work Opportunity Tax Credit (WOTC) if you hire a veteran who falls into any of the following categories:

Even if a veteran does not fall within any of these categories, he or she may still be a member of another targeted group, so it is important to understand the stipulations. This tax credit reduces your tax bill dollar-for-dollar, and is based on the amount of wages paid to the eligible veteran in the first year of employment. The maximum credit is based on a set percentage of maximum first-year wages and the number of hours worked. There is no limit on the number of eligible employees you can hire for the credit, and the WOTC is currently set to run through 2019. It’s important to note that you must submit the required forms to the IRS within the employees first 28 days of employment to potentially claim the credit.

While it’s easy to thank a veteran for his or her service to the country, one of the most tangible ways to show your support of U.S. troops and veterans is to give a veteran a real opportunity at meaningful employment when you can. Take the time to really review their resume and get help if needed in understanding military verbiage. Look deeper at how these skills might translate to your industry, and steer away from stereotypes you might be tempted to engage. These Americans have sacrificed years of their lives and many of the civilian world’s outward signs of success to serve their country and protect freedom across the world.