In the mid-1970s, a sailor’s wife was walking across the clinic grounds of the National Naval Medical Center in Bethesda. As Pauline Trost paused, she saw a Navy helicopter land on the medical center’s helipad, and a sailor, his wife, and two small children disembark with their luggage. Knowing that they must have traveled a great distance for treatment, she wondered where this young family would stay. Living in D.C., she knew the hotels and motels in the area were very expensive, most likely beyond the means of a young, military couple. She would never know what 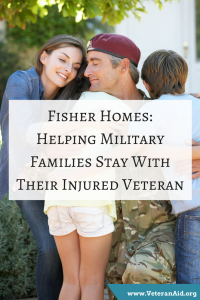 would happen to this family, but their memory – and the concern she felt for them – stayed with her for years.

A little more than 10 years later, Trost would have the opportunity to help families like the one she had seen stepping off that helicopter. Her husband – now the Chief of Naval Operations Admiral, Carlisle Trost – had been approached by the well-known Brooklyn builder, real estate mogul, and philanthropist, Zachary Fisher. Fisher, already famous and much-awarded for his generous support of Armed Forces charities, missions, and funds, was looking for a new way to support military families undergoing difficult times. Admiral Trost shared his wife’s vision for free, home-like facilities where families could stay while their loved one underwent treatment, and Fisher ran with the idea.

The first two Fisher Houses opened in 1991, with President George H. W. Bush personally dedicating the new location at Bethesda. Fast forward to present day, and there are now 71 Fisher Houses open in the United States (and one in the U.K.), providing free lodging for military families, as well as sponsoring programs that put donated airline miles and hotel points to use as well. Since 1990, the Fisher House organization has helped more than 307,000 families and provided more than 7 million days of lodging, saving families more than $200 million in lodging and transportation costs.

The goal of the Fisher Homes is to create a “home away from home” for military families. Houses are located at major military and VA medical centers nationwide, close to the medical center or hospital they serve. They are typically 5,000- to 16,800-square foot homes that are donated by the Fisher family and Fisher House Foundation, with each house designed to provide 8 to 21 suites. The houses can accommodate 16 to 42 family members and feature private suites with bathrooms, a common kitchen, laundry facilities, spacious dining room, and an inviting living room with library and toys for children. Many more houses are currently under construction, and the newest houses are 100% handicap accessible and include elevators.

Once constructed, a Fisher House is presented to the military services and Department of Veterans Affairs as a gift, and the commander or director of each local medical center is responsible for establishing the eligibility, priorities, and selection criteria for staying in the house. To check on availability and eligibility, a veteran or family member should contact the Fisher House manager at the nearest location for more information. Fisher Houses at VA medical centers do not charge a room fee, and all room fees for guest families at all Army, Navy, and Air Force Fisher Houses are paid by Fisher House Foundation.

The Fisher House organization also provides citizens a tangible and trustworthy way to support military families. The Fisher House Foundation has received an A+ rating from the American Institute of Philanthropy in its “Veterans and Military” category for seven straight years (out of 42 charities rated, Fisher House Foundation is one of four charities to receive an A+ rating). Additionally, Fisher House Foundation received a four-star rating from Charity Navigator for more than a decade, an accomplishment attained by only the top one percent of non-profits they evaluate. Interested supporters can donate monetarily in a number of ways, or volunteer their time through house events, fundraisers, and the annual golf classic.

Additionally, the Fisher House Foundation operates the Hero Miles program, which uses donated frequent flyer miles to bring family members to the bedside of injured service members, as well as the Hotels for Heroes program, which uses donated hotel points to allow family members to stay at hotels near medical centers without charge. The Foundation also manages a grant program that supports other military charities and scholarship funds for military children, spouses, and children of fallen and disabled veterans.

Thanks to the generosity of the Fisher Family, and the vision of Pauline Trost, no military family should have to worry about how they will be able to afford to stay by the side of their injured or ill loved one. The Fisher House network allows them one less thing to worry about, and the tangible means to be there for their veteran.

One Response to “Fisher Homes: Helping Military Families Stay With Their Injured Veteran”