“We have an important job for you. It could save the lives of hundreds of soldiers. It will be dangerous. And you can’t tell anyone what you’re doing.”

It sounds like something out of a Hollywood spy movie but in reality, it was the story of the World War II Navajo Code Talkers, whose service is celebrated every year on August 15. 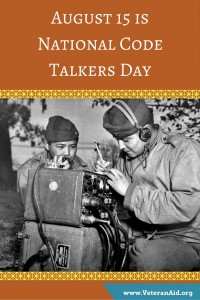 For more than 20 years after their service, their heroic actions against the Japanese – including transmitting more than 800 classified messages without error during the Battle of Iwo Jima – were top secret. When the code was finally declassified in 1968, Americans slowly began to know there role, and 14 years later, President Ronald Reagan officially designated National Navajo Code Talkers Day.

The Navajo Code Talkers originated in 1940 when a 29-man group of young Chippewas and Oneidas graduated from Marine Boot Camp to became a part of the radio communications 32nd Infantry Division. They were later joined by members of the Sac and Fox tribes as combat radiomen, and because many did not have birth certificates, recruits as young as 15 enlisted. By the end of the war, more than 430 Navajo men had joined the cause to help expedite the end of the War, and many military experts suggest the victorious outcome might have been different without the Code Talkers.

Cipher machines, or machines that create coded messages, did not work well in the jungles of the Pacific Islands, and the complexity of Navajo linguistics made it the ideal choice to encode messages on troop movement, plans, and communications. The Navajo language had little documentation for learning to speak it, and fluent speakers knew that some words could have multiple meanings. Its tonal qualities also made it extremely difficult to decipher.

The Code Talkers took English code words then translated them into their language, starting with about 200 terms and growing to around 600 terms by the end of the war.  With this code, Code Talkers could communicate in 20 seconds what previously took a coding machine more than 30 minutes. They were placed in the most dangerous battles and depended upon to share coordinates, enemy updates, and reports from the frontline.

Ironically, some of the Code Talkers were born in a country that didn’t recognize them as citizens, while others endured boarding school policies that punished them for speaking their Native language. Thankfully, the Navajo language survived and the Code Talkers were one of the most visible groups to advocate for preservation of the language, known in Navajo as “Diné Bizaa.”

Major Howard Connor, 5th Marine Division signal officer, later explained that he had 6 Navajo code talkers working continually during the first two days of the Battle of Iwo Jima. He was quoted as saying, “Were it not for the Navajo, the Marines would never have taken Iwo Jima.”

The length of classification of their activities and the Code points to the fact that it was still a valuable asset to the U.S. military for years after the end of the war. In 2000, President Bill Clinton signed into law the statute awarding the original 29 Navajo Code Talkers with Congressional Gold Medals – the highest civilian award in the United States. A year later, President George Bush personally presented the Congressional Medal to four of the five surviving Navajo in the Capitol Rotunda in Washington, D.C.

The last of the original 29 Code Talkers, Chester Nez, died in New Mexico in 2014. He had attended the ceremony in the Whitehouse 13 years before, where the president explained:

“Today, we marked a moment of shared history and shared victory. We recall a story that all Americans can celebrate and every American should know. It is a story of ancient people called to serve in a modern war. It is a story of one unbreakable oral code of the Second World War, messages travelling by field radio on Iwo Jima in the very language heard across the Colorado plateau centuries ago.” — President George W. Bush

This August 15, all Americans can recall the heroic actions of young Navajo men that helped save hundreds of lives by bringing World War II to a close, simply by relying on the language of their ancestors.

One Response to “August 15 is National Code Talkers Day”