They follow a “call within a call,” combining their deepest beliefs with an unyielding commitment to their fellow soldiers. Some are deployed to the battlefield where they face the same violence of war encountered by other soldiers, often rushing into combat to administer spiritual care to their men with little concern for their own well 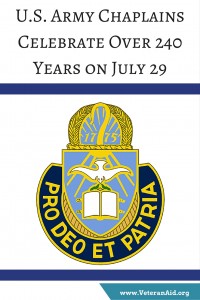 being. Others help thousands of families on the homefront who wait for their loved one’s return or look to them for weekly support in their own spiritual journeys.

The Chaplain Corps of the United States Army is comprised of more than 2,700 ordained clergy members, representing more than 100 different religious denominations. On July 29, 2016, the Chaplain Corp will celebrate its 241st birthday, and since its establishment in 1775, more than 25,000 Chaplains have served all three components of the U.S. Army – Active, Guard, and Reserve.

The purpose of Army Chaplains is to offer religious services, counseling, and moral support to the armed forces, whether in peacetime or at war. Chaplains perform religious support activities according to their faith and conscience, and also provide religious support of other faith groups by coordinating with another chaplains as needed. They also advise commanders to ensure the “free exercise” rights for all soldiers are upheld, including those who hold no faith. Today, the U.S. Army Chaplain Center and School is located at Fort Jackson in Columbia, S.C., along with the Chaplain schools for the Air Force and Navy, in an effort to share training and instruction between chaplains for all military ministry training.

Throughout the Army's history, the Chaplain Corps has provided ministry and counseling services to soldiers around the world. As both commissioned Army officers and enlisted soldiers, they have served in more than 270 major wars and combat engagements. There are countless stories of Chaplains rushing into the battle to minister to their men, or even drag many to safety, with no concern for their own wellbeing. They have served their soldiers in POW camps and on the frontlines, and more than 400 Chaplains have laid down their lives for their fellow soldiers. Six have received the U.S. Medal of Honor.

One of the most famous groups of Army chaplains is known as “The Four Chaplains.” When the troop-transport ship Dorchester was torpedoed by a German sub during World War II, these four Army Chaplains ministered to the more than 900 soldiers and sailors on the sinking ship, helping them into lifeboats and giving up their life jackets when supplies ran short. As the ship sank, the Chaplains joined arms, said prayers, and sang hymns as they went down with the ship. These Chaplains were Methodist minister the Reverend George L. Fox, Reform Rabbi Alexander D. Goode, Roman Catholic priest Father John P. Washington, and Reformed Church in America minister the Reverend Clark V. Poling.

The U.S. Army Chaplain Museum tells this story and many others as it recounts the history of the U.S. Army Chaplain Corps from its inception in 1775 to present. Located on the lower level of the U.S. Army Chaplain Center and School at Ft. Jackson, the museum showcases Chaplain history in chronological order through a variety of exhibits featuring early uniforms and insignia, chaplain equipment, field services, and even a hospital scene. Visitors can listen to Bing Crosby’s rendition of “Soldiers of God,” read a Korean War-era Chaplain assistant’s memoirs, see President Abraham Lincoln’s assignment order for a hospital Chaplain, and listen to General George S. Patton’s famous Weather Prayer.

As the Chaplain Corps looks forward to its 241st birthday, many veterans, soldiers, and civilians can pause to give a moment of gratitude for these military Chaplains who continue to serve U.S. soldiers in important and meaningful ways, both on and off the battlefield. Driven by their beliefs and their love for their fellow man, Army Chaplains bravely share the heavy load of war that is felt by their military brothers and sisters.