In order to bring greater awareness to the issue of PTSD, the United States Senate designated June as PTSD Awareness Month by the National Center for PTSD (NCPTSD), also naming June 27th as National PTSD Awareness Day. Through this designation, it is hoped that more people will be aware of the disorder and how it may affect the veterans they know, as well as encourage veterans to reach out for help if they need it.

We hear about posttraumatic stress disorder (PTSD) quite a bit in the news and on social media these days, and, thankfully, more and more of the civilian population is slowly beginning to understand it for the first time. It’s important that they do so because such a large percentage of the veteran population suffers from it on some level – 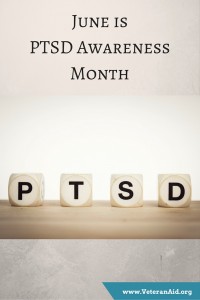 almost 31 percent of Vietnam veterans, 10 percent of Gulf War (Desert Storm) veterans, and 11 percent of veterans of the war in Afghanistan. With these numbers, it’s likely that most people know someone who struggles with PTSD, most in silence.

The Department of Veteran Affairs (VA) created a resource-filled website called About Face to assist veterans and loved ones struggling with the results of PTSD. The site includes a series of videos interviewing PTSD-sufferers who finally sought help and saw great improvement in their lives. These relatable profiles are aimed at removing the stigma and anxiety of telling one’s doctor about the symptoms and asking for assistance. Sadly, many veterans consider or succumb to suicide after struggling for so long with the disorder. Showing that a veteran is not alone in what he or she has experienced, both during war and back at home, can be the lifeline they need.

PTSD is a mental health problem that can occur after someone has been exposed to a single traumatic event or multiple traumatic events, including war-related combat stress. Symptoms of PTSD include ongoing (longer than a month without improvement):

The VA site also details the types of therapies that seem to help combat PTSD, including cognitive processing therapy (a process that helps a veteran get “unstuck” from obsessive thoughts about the trauma) and prolonged exposure therapy (confronting the memories head-on and learning effective coping mechanisms to work through them). Some veterans have also found relief through equine therapy, art therapy, and learning hobbies like veteran-focused fishing groups, both of which help the veteran escape to a quiet place and focus on a new activity that engages mind and body.

With a greater awareness, understanding, and support to our wounded warriors – including those suffering from injuries that cannot be seen with the eye – the chance of more and more veterans successfully walking the long road to recovery will be increased.  They deserve the help and understanding, and it’s imperative that they feel this support even as they return home.

One Response to “June is PTSD Awareness Month”