The Real Origin of Memorial Day

Posted in Uncategorized on May 26, 2016
Tags: history, holiday, military, veterans

While most Americans appreciate the day off from work and the expected barbecues and summer festivities associated with Memorial Day, for many others it is a very serious day of remembrance and reflection. Other patriotic holidays – like the Fourth of July or Armed Forces Day – celebrate all members of the military, and with 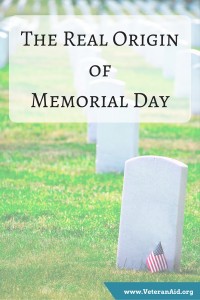 good reason. But Memorial Day, celebrated the last Monday in May each year, is specifically set aside to honor those who have lost their life in active military service.

Originally known as “Decoration Day” and traditionally celebrated on May 30, the day was set aside to encourage Americans to visit the graves of those who perished in war and decorate their tombstones. Although families and citizens have been honoring their fallen warriors for hundreds of years, the formally designated Memorial Day originated with an order issued in 1868 by Maj. Gen. John A. Logan, the commander-in-chief of the Grand Army of the Republic.

Interestingly, there are numerous accounts from all over the U.S. as to how the “first” Memorial Day took place (more than two dozen U.S. cities claim to be the birthplace of Memorial Day), although all center on the ending of the American Civil War. A few of the possible origin stories include:

As you can see, when the Civil War finally came to a close, war-weary Americans everywhere had the same idea: It was important to honor and always remember those who had given their lives for their country. This still holds true today and all Americans should take pause on this important day to, at the least, observe a moment of silence and thanks for all fallen members of the armed services.

One Response to “The Real Origin of Memorial Day”