If you’ve ever tried to make a phone call on your cell in a noisy area, or have experienced static or a bad connection, 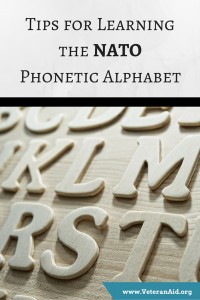 you know how challenging it can be to hear and be heard. Now imagine if, instead of day-to-day conversation, you were giving coordinates for an air strike, and the static on the line is actually gunfire. You suddenly realize the imperative nature of clear and concise communication that does not have to be repeated.

The military alphabet – also known as the NATO phonetic alphabet – assigns 26 code words to the 26 letters of the alphabet. The International Civil Aviation Organization (ICAO) developed this system in the 1950s to unify the various phonetic alphabets that had been in use since WWI by different organizations and countries. Many were similar, but differed slightly, making it challenging for allied forces to communicate effectively. Native language also affected the pronunciation of code words, adding to the confusion.

The ICAO alphabet introduced in 1946 finally offered a solution, after hundreds of thousands of comprehension tests involving 31 nationalities. Tests went so far as to test clarity when a word was used in isolation compared to when it was used in succession with other letters. The resulting alphabet is today used by all NATO countries, although the written spelling of some of the code words differs slightly based on country (for example, in France, “Juliet” is spelled with two t’s at the end since one “t” is silent in French).

This makes the code useful even for civilians when talking over the phone with international call centers or support lines. Remember, this is not a secret code, but strictly an established protocol for ensuring that spelling, coordinates, and information are correctly communicated without confusion.

One interesting note, anyone in the U.S. military will tell you that when you need someone to repeat information over a communication line, you say, “Say again.” If you were to say, “Repeat,” you are telling them to fire again.

Whether you are learning it for use in the military, in aerospace, or just so you can understand war movies more easily, the simplest way to learn the NATO alphabet is old-fashioned memorization. Experts recommend breaking the list up into groups of five and memorizing one group every few days. There are also a handful of more creative ways to learn, thanks to the Internet.

Memorize the list below and you’ll be able to give and understand coded coordinates and instructions like a member of the US military.

There is also a set of code words that corresponds to a numeral set. They are as follows:

3 Responses to “Tips for Learning the NATO Phonetic Alphabet”