There’s a not-so-secret club for women that no one wants to be a part of, but many are. Members wear a small pin on 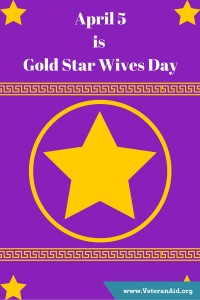 their lapel, a purple circle with a small gold star. They don’t often make the news, and you probably don’t think of them much on a day-to-day basis. But they are out there, with numbers growing every day, living out a sacrifice made by someone they loved.

These are members of the Gold Star Wives club and they have lost their spouse in military service, or as the result of service-related disabilities. In 2013, the U.S. Senate designated April 5 as Gold Wives Day in recognition of the sacrifices made by these spouses and their family members.

During WWII, there was a tradition of families of servicemen hanging a service flag in the window of their home. The flag featured a small start for each member of the family in the military; blue for living servicemen and gold for those who had lost their lives. In 1947, Congress built upon this symbolism, and created the gold star lapel pins to be given by the Department of Defense to spouses and family members of service members killed in combat.

Today the Gold Star Wives Club not only offers support to each other – through experiences only other military widows and widowers can relate – but also is an active force in legislation and government. Its members appear before various House and Senate Committees on issues concerning compensation, educational benefits, medical care, and other programs pertaining to the welfare of military survivors. For the last 70 years, the group also has held an annual convention in cities throughout the United States.

When a military spouse becomes a widow – or a widower – they experience a wide range or emotions and changes rapidly. Not only do they have to deal with the death of their loved one, but they may also have to move out of military housing, find a job, and basically start a whole new life. Many have young children, and suddenly every plan for the future is changed. Connecting with others who have walked the same path and can understand the full range of emotions – the good, the bad, and the ugly – can be a lifeline in the hardest times.

So in honor of Gold Star Wives Day, what can you do to help or honor widows and widowers of America’s armed forces?

We at VeteranAid.org would like to offer our gratitude to the families of fallen servicemen who continue to live out the sacrifice made by their loved one in defense of our country. We thank you and your loved one for your service to our nation.