How the Navy was started

actually played a pivotal role in the creation of the U.S. Navy in 1794. In fact, one of the main arguments for creating the Navy was to save the fledgling United States money that would otherwise have been spent on ransoming back captured sailors.

However, even before the pirate encounters of 1794, there was in fact an “old” United States Navy known as the Continental Army.  And even previous to that, many of the colonies actually had their own small fleets of ships, created and maintained by a large community of sailors, captains and shipbuilders. A movement to first create a larger Navy was proposed by colonists whose smuggling activities were being severely hampered by British ships.

While the resolution to create the Continental Navy was initially tabled, George Washington independently began acquiring ships, going so far as to pay for the first commissioned ship – the Hannah – with his own money. The Hannah was commissioned and launched on September 5, 1775, from the port of Marblehead, Massachusetts, and a month later, the Continental Navy was officially founded. Congress authorized the purchase and arming of two vessels, along with the building of 13 frigates, five ships of 32 guns, five with 28 guns, and three with 24 guns.

After the Revolutionary War ended, the Continental Navy was disbanded, just as the first Continental Army was. Americans were not only wary of standing armies and military organizations, but were frankly broke and simply trying to stay afloat financially. However, the United States desperately needed to collect the established tariffs set on imported goods and combat rampant smuggling, so in 1790, it established the Revenue-Marine, the forerunner for the United States Coast Guard, which included 10 cutters. For the next seven years, the Revenue-Marine would be the only armed maritime service for the United States.

The young United States continued to grow and prosper, however, now free from the influence – and protection – of local British military forces, including the Royal Navy, there was no one to prevent foreign pirates from terrorizing U.S. merchant ships. Particularly troubling were Barbary pirates from four North African Muslim states. At the same time, Portugal and Algiers signed a peace treaty that ended Portugal’s blockade of the Strait of Gibraltar that had been keeping pirates mostly contained in the Mediterranean. Without the blockade, Barbary pirates sailed into the Atlantic, and quickly captured 11 American merchant ships and more than a hundred seamen.

Quickly seeing that it was more affordable to defend oneself than constantly pay the ransoms required for captured sailors, the United States decided to reinstitute a standing naval fleet and passed the Naval Act of 1794. The first members of this “New” U.S. Navy were six frigates, and the official birthdate of the U.S. Navy was set as October 13, 1775.

The U.S. Navy would go on to fight in several smaller engagements around the world during its fledgling years. As it gained strength, it would play a major role in the American Civil War, blockading the Confederacy and seizing control of Southern rivers. It later also played the central role in the World War II defeat of Japan. The Navy of the 21st century maintained a strong global presence, deploying in areas such as East Asia, the Mediterranean, and the Middle East.

Little did the first U.S. citizens know that humble yet practical start 240 years ago would lead to one of the world’s supreme naval fleets. Today the U.S. Navy has the world’s highest combined battle fleet tonnage and the world's largest aircraft carrier fleet, along with more than 300,000 active duty personnel and another 101,000 in the Navy Reserve. Today, you can still visit the most famous of the original six frigates, the Constitution (also know as  “Old Ironsides”), where it is anchored in Boston harbor. 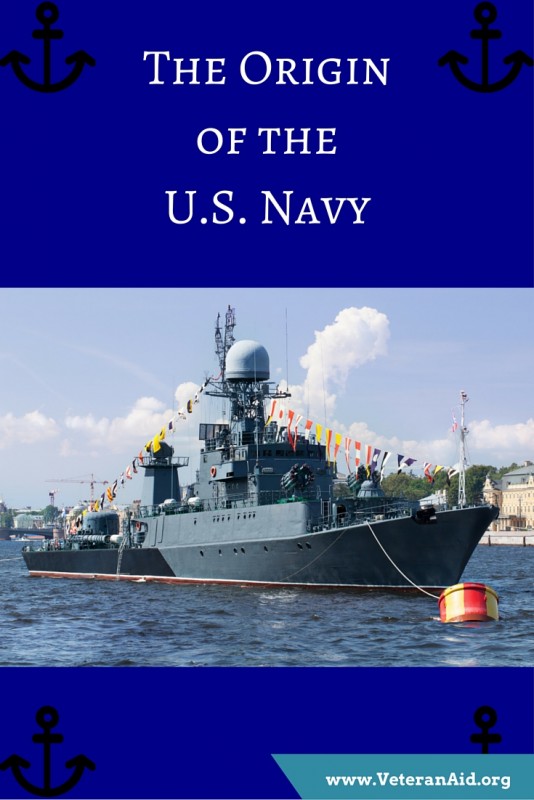 3 Responses to “The Origin of the U.S. Navy”